The Forbes Building is a 147-unit subsidized building in Jamaica Plain, housing mostly elderly and disabled residents. When the Forbes Building was built in 1976, owners received a low-interest mortgage through the State’s 13A program. In exchange, they agreed to keep in a portion of the building’s units well below-market for the duration of the mortgage period. On March 1st, 2022 the mortgage period will officially end, allowing the owner to legally raise previously subsidized rents.

For several years, the Forbes Building Tenant Association (FBTA) has been organizing to preserve their building as long-term affordable housing upon the expiration of the 13A mortgage. But in December 2020, the Forbes Building owner suddenly walked away from a full preservation and subsidy package to preserve the building’s affordability following the 13A mortgage expiration. Since then, the FBTA has mounted a campaign to bring the owner back to the negotiating table and save their homes. 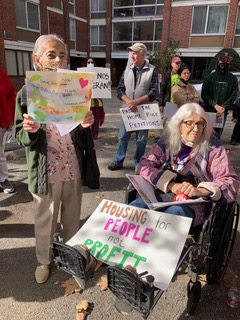 In 2021, the FBTA organized two rallies, bringing together hundreds of tenants, community supporters, and elected officials including Mayor Michelle Wu, State Representative Nika Elugardo, and several Boston City Councilors. Many JP community groups also endorsed the FBTA’s demands, including JP Progressives, JP Neighborhood Development Corporation, and the JP Neighborhood Council. In October 2021, Forbes tenants sent over 1,200 signatures on a community petition to the owner, urging him to "Sign the Contracts Now to Save Our Homes".

As the March 1st deadline approaches, the FBTA is continuing the fight to preserve the Forbes Building as long-term affordable housing for current and future tenants. Stay tuned!