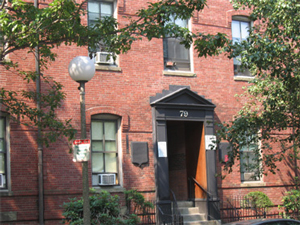 In addition to the existing building, The Smith developers William Gause and Leggat McCall plan to construct three more similarly sized towers along the block adjacent to the East Canton Street apartments in the coming years. The Smith is just one of many examples of the rampant luxury development occurring across Boston in general and throughout much of the South End specifically, which threatens to upend the diverse, working-class community that has long inhabited the neighborhood.

To preserve the historically diverse character of their South End neighborhood, East Canton Street tenants participated in nearly every community meeting throughout The Smith’s development process. Their organizing won a series of commitments from developers Gause and McCall, including promises to designate an acre of open space for a public park in between the first and second Smith buildings for use by community residents; ensure adequate parking options for East Canton Street tenants; preserve the historic tree canopy along East Canton Street; and designate 30 of The Smith’s first 300 units as affordable housing.

MAHT stands with East Canton Street tenants in their struggle to shape the future of their community.